Artificial Intelligence and Robotics
Marketing on the Web

Certain tools have their weaknesses, which is why it is important to take them into consideration while choosing the best tool for a cryptanalyst. In case, one wants to conduct cryptanalyst to decipher a text encrypted with the Caesar cipher, histogram tool will be the most effective. First of all, Caesar cipher has some immanent weaknesses and flaws; and the main one is its vulnerability to statistical analysis (Kendall, 2008). Thus, it complicates the entire deciphering process because cryptanalysis depends on the length of analyzed ciphertext. The longer is text the harder it gets to decipher it considering the complications which follow within a text with relative frequency of standard characters. In this case, histogram will work the best since it actually focuses on the relative frequency. Histogram allows comparing the amount and “dominance” of certain letters, which is very effective in monoalphabetic ciphers like Caesar. It helps counting the letters, which appear the most often. In this case, one may figure out what each letter stands for. It is easy to do in English alphabet where letter “e” appears the most often, and with such knowledge, one can substitute the letters and decipher the text.

Caesar cipher allows seeing the frequency of letters. It can be done by using histogram tool. This way, there are high peaks for the letters’ frequency. There is also distinction between usage patterns thanks to the low valleys that simplify the overall process of deciphering. Thus, one may use key words to create shifts in Caesar histogram in order to decrypt the text.

Thus, the main case is that there is a different distribution of characters of both ciphers, which is why they cannot be deciphered with the same tools.

The famous quote of Albert Einstein was encrypted with “Playfair” using the plaintext and the key (which was AlbertEinstein). Thus, the quote that looks like this in normal text - “The difference between stupidity and genius is that genius has its limits” - looks like this with cipher: SDAHFOWGRABSSRERIVBYBSCIMQTFNIVETGHBSNQCNCSDTDHBSNQCDECNICIF CTIC

In order to decrypt the text, one uses a key and gets such results:

In order to determine the most secure cipher, one must calculate the entropy of each cipher. The entropy determines how often the characters, which are relative to each other, occur. Higher value is better because it makes it harder to decipher the text.

ECB stands for electronic codebook, and CBC means cipher-block chaining. They are both block cipher modes of operation. Interestingly, both of them are also variations of the DES. DES, or Digital Encryption Standard, was created in 1976 as a 56-bit version of Horst Feistel’s Lucifer cipher that was an IBM product (Singh, 1999). DES has its weaknesses since it converts and encodes messages into 64 bit blocks. Thus, it makes the deciphering easier since it may reveal patterns as a result of content repetition. CBC, on the other hand, combines blocks with preceding blocks eliminating the weakness of DES. Nevertheless, this innovation may be quite difficult to implement because it may cause errors in the messages. On the contrary, ECB affects blocks of data.

Both ECB and CBC may be used in different spheres. When it comes to an online bank statement, CBC seems like a better choice because it is more secure than the ECB. It is better to use it with many checks, deposits and other transactions.

CBC is also better for viewing websites using TCP/IP for the reason that TCP/IP delivers packets in order, and there is no obvious pattern with the content.

When it comes to voice over IP (VoIP) connections, it is better to use ECB since VoIP protocols are connectionless. CBC does not work well in this case since it needs error free messages to be deciphered at the receiver side, complicating the process.

Usually, block size depends on the key values. Thus, it is better to use longer keys. Such usage makes statistical analysis more complicated to decipher.

An example can be seen with this screenshot: 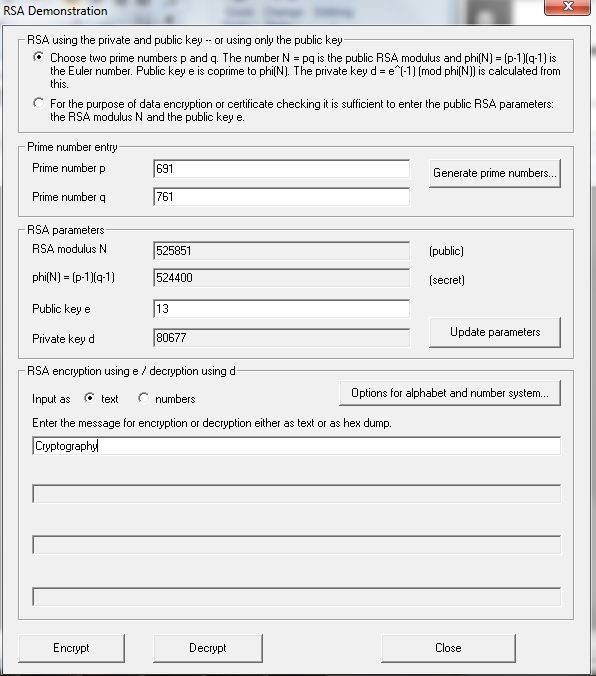 For instance, one may use random key, and then use it to encrypt the message. As it was mentioned before, it is better to use longer keys. On the other hand, some researchers stated that RSA cryptosystem did not necessarily require strong primes (Rivest & Silverman, 1999). That statement was proven wrong since the greater amount of primes complicated the process of deciphering. Thus, it is harder to break the code if one has increased the key length and modulus sizes. That is the reason larger keys are better if one wants to avoid cryptanalysis. They are also more effective and stronger since smaller keys are easier to cryptanalyze.

Data encrypted with the RSA cipher differs greatly when comparing it to the other methods. First of all, it is important to note that RSA is much more secure than other traditional ciphers. Thus, it is much more useful and practical, and it is much more logical to implement it. There is also an advantage with the histogram while using this method. Histogram is random; thus, characters appear randomly, which makes deciphering process more difficult. In this method, key size determines how difficult the cipher is.

Comparing this encryption method with others, it is easy to see that it is much more practical. For example, Caesar or Vigenere histograms do not provide such randomness as the previous method. Caesar and Vigenere are also easier to decipher because they are less complicated; when in RSA, one can complicate the entire deciphering process by simply increasing the length of the key.

Nevertheless, this method also has some flaws. First of all, it is rather slow comparing to other methods. Second, it is also harder to understand it and provide a thoughtful mathematical analysis of this method.

Hybrid RSA-AES cipher has many advantages. First of all, comparing it to RSA or other ciphers, it is more secure than the previous ones; and that makes this cipher more effective.

Second advantage is that the AES cipher and cipher-text are synchronous. Another advantage is that Hybrid RSA-AES cipher has low latency, and that fastens this cipher, and makes it quicker comparing to other methods. RSA, for example, has a high latency; especially during end-to-end real-time transmission latency.

Unfortunately, there are also some disadvantages to this cipher. The main flaw of this method is the absence of authentication, which makes it harder to check the information and text.

Thus, it can be said that all of the ciphers have their strong sides as well as disadvantages, which is why it is important to analyze them all in order to determine the most effective one.

Some text in the modal.

Some text in the modal.